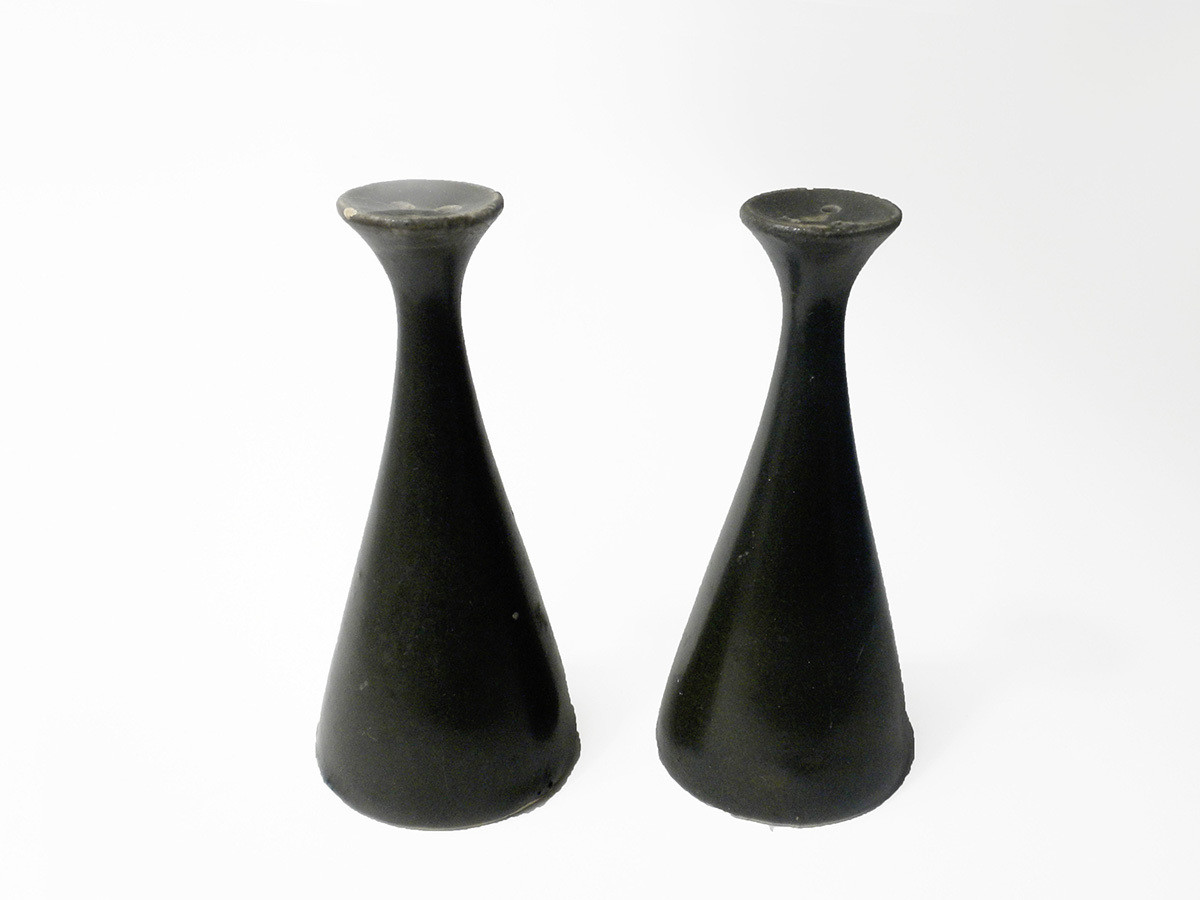 B:A01-15-v434
$1 000.00
In stock
1
Product Details
Brand: Andersen Design
This as a very rare set of early salt shakers, by Weston Neil Andersen, the founder of Andersen Design. Weston studied ceramic slip casting under Eva Zeizel at Pratt Institute in the 1940’s where his education was interrupted by World War II. In the late forties and early fifties he was dean of the Akron Institute Art School where he had access to a then state of the art ceramic facility where he developed his ideas which became the first functional ware line with which Andersen Design, then called Ceramic by Andersen was established.
We have a small collection of these early pieces done while working at the Akron Art Institute, The photo shows the Andersens holding some of the early pieces in their Ohio home. These pieces which were done before the slip casting studio was set into operation and have a distinct quality of their own, reflecting the time and environment in which they were created, They are cast in porcelain rather than the stone ware which is used by Andersen Design.

There is only a small collection of these original pieces and as far as we know there are no others so they are very rare.

The saltshakers which were eventually produced for the Andersen line have thecurve which flairs outward much closer to the center of the form. These saltshakers look like Dad turned a stoneware wine class upside down and made it into a saltshaker. That is how he worked.

Weston and Brenda Andersen were part of the young designers movement of the 1950’s, They took a different path than their peers when instead of designing for industry, they moved to Maine and established themselves as designer craftsmen and set up their own slip casting studio. The family designed a large line of wild life sculptures and functional forms which have been collected and handed down from one generation to the next. Andersen Design remained an American made product when most of the western industry relocated production to global low-cost labor markets, Andersen Design continues to produce hand crafted ceramics in the USA today.These are handcrafted prototype slip-cast saltshakers that were created as part of a design process. One saltshaker has a light glaze bead on the bottom. The glaxe becomes a lighter color around the edge and there is a dot of lighter brown on the top of one of the shakers