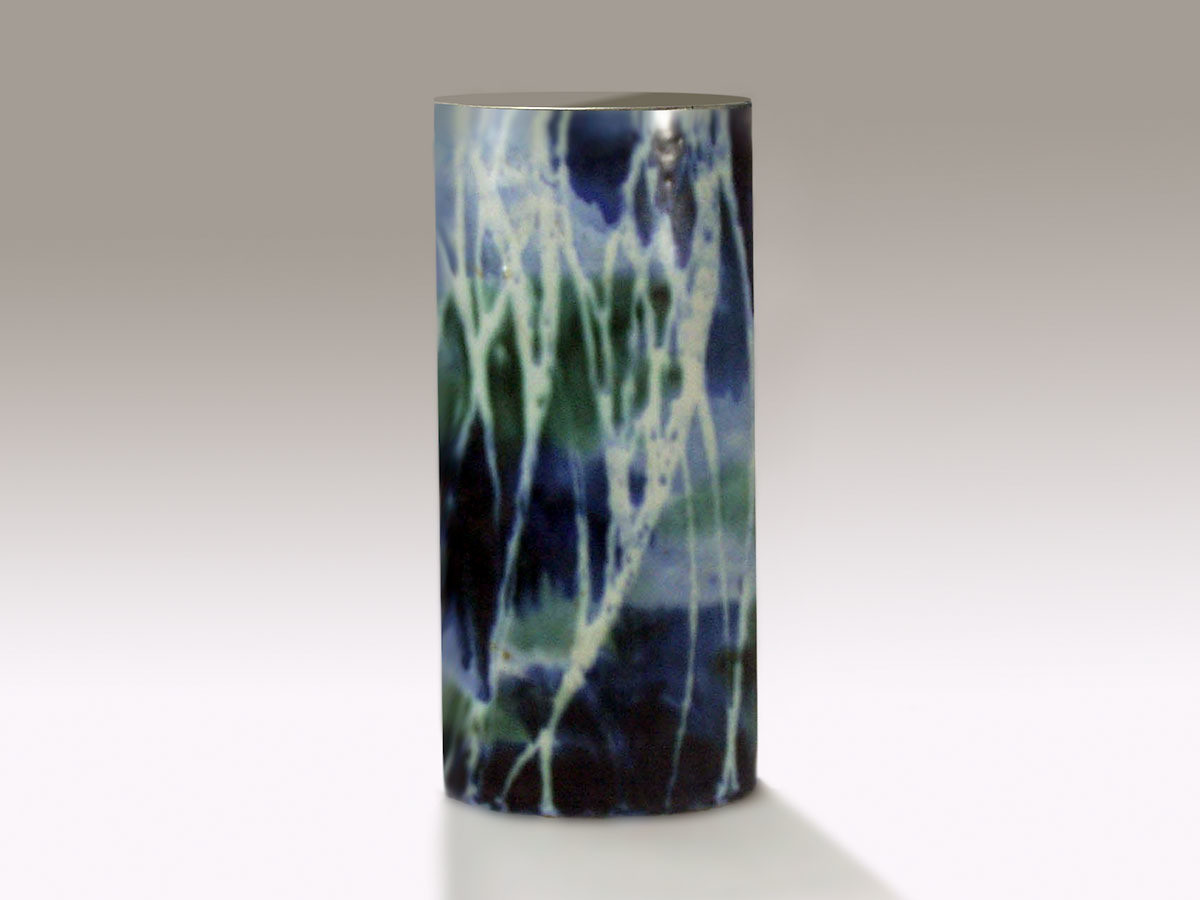 Andersen Design is an American Designer Craftsmen Studio established in 1952 on Southport Island, Maine, USA by Weston and Brenda Andersen.

This vase is a prototype pattern created and executed by Brenda in the birch tree pattern on a blue green background, Brenda developed patterns that were repeated by other artisans as part of the production process. The original pattern was a loose archetype intended to be given individual expression by the hand of the artists who rendered the pattern but to be identifiable as an idea which could be ordered by the customer as a repeatable pattern. Many a customer took their time in deciding which unique rendition was the one that most spoke to them.

Brenda Nash was raised in London. She was sent on scholarship to the Royal College of Art. Brenda was working for a photographer when she met a young American soldier, Weston Neil Andersen, at a ballroom dance, in London during WWII.

After the war the couple returned to New York where Weston resumed his college education at Pratt Institute where he learned slip casting under Eva Zeisel.

The couple was part of the young New York designer’s movement of the 1950’s. Weston and Brenda took a unique path when they moved to Maine and set up their own slip-casting studio, leaving behind their urban peers who were designing for large companies which outsourced production. Andersen Design was started with a vision to creating a hand-made product affordable to the middle class. It was the age of plastics when the American middle class was golden.

Brenda developed many prototype decorative approaches to decorating the forms designed by Weston. This vase is a prototype design developed and executed by Brenda likely in the 1980’s. It’s color pallet is deep green, blue, white and gray. Brenda’s hand is lyrical, confident and free flowing. This pattern is called the Birch Tree Pattern.

The signature is a hand brushed AD in brown decorating color. There is a firing crack on the bottom of the vase which goes slightly up the side which causes the vase to leak water. The glaze inside the vase has many pinholes. The vase is a beautiful example of Brenda’s decorative exuberance,

The Oval column vase was designed by Weston. We call it the 49 Vase because that is the number it was given. It is slip cast in white stone ware and is 9 inches tall. The form is a flattened oval cylinder. Weston also designed the decorating colors and glaze

Everything Andersen Design makes begins with the raw materials of the earth and is hand-made in the USA.