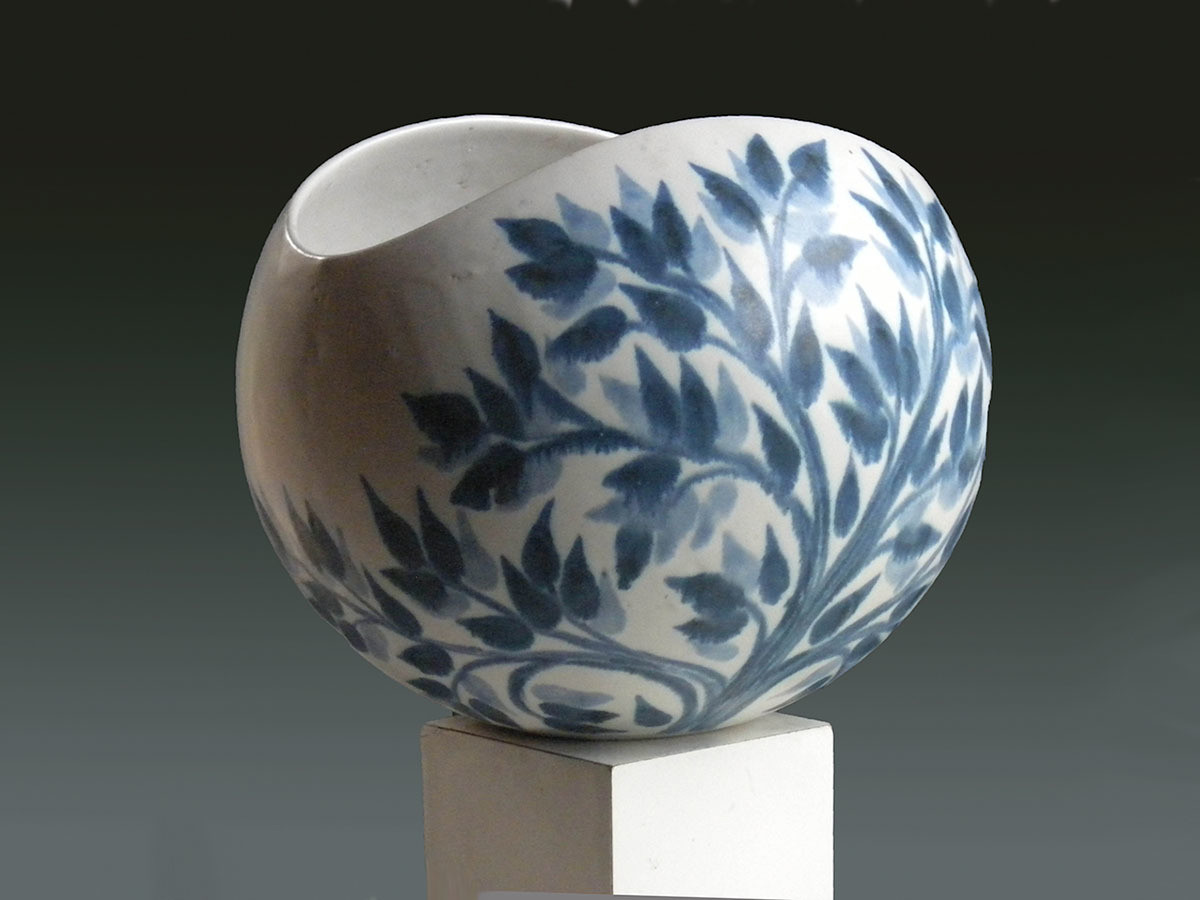 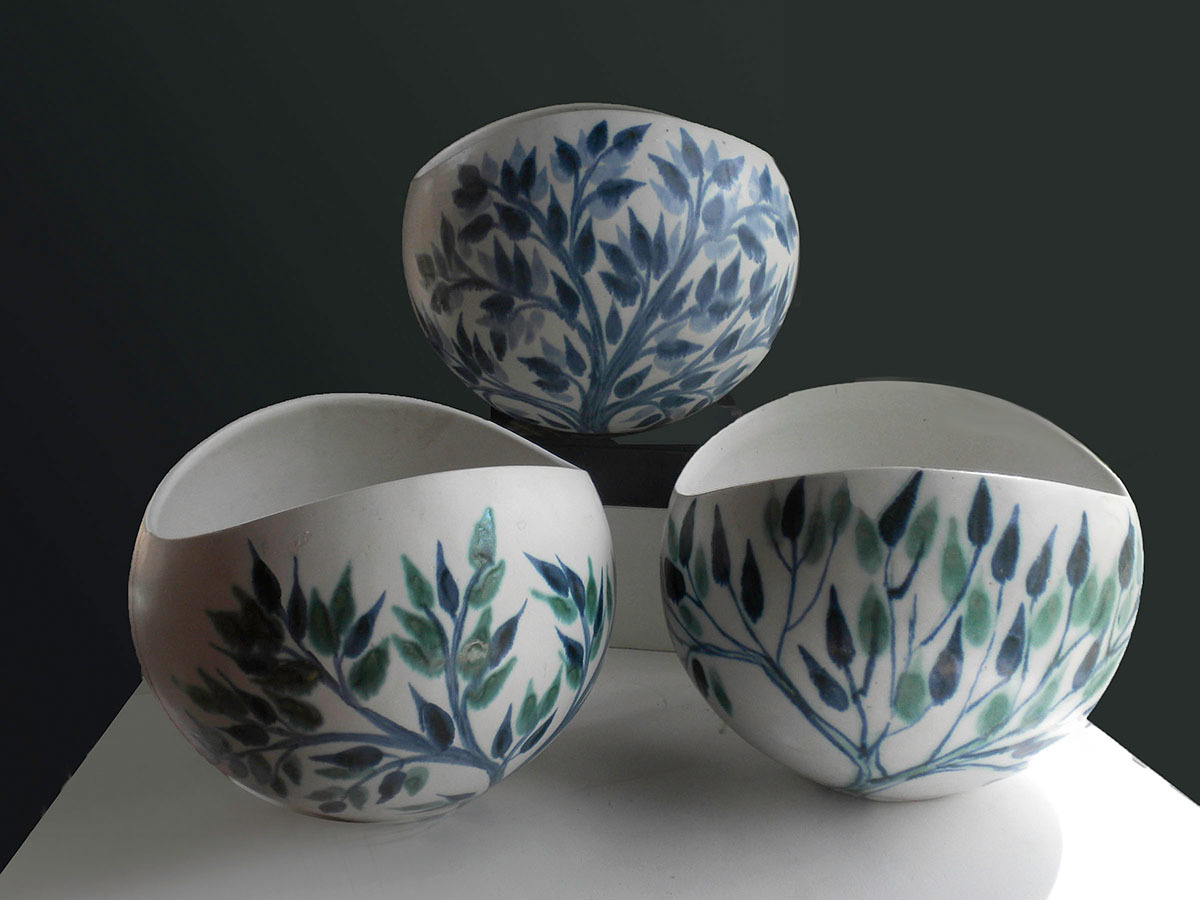 The Large Salad Bowl, ten inches in diameter, with the two tones of blue leaves has been around for a long time, while I thought it was a beautiful decoration done on a bowl which had become warped in the casting. Recently. when photographing the bowls together, I realized I was wrong. The reason I thought the bowl was warped was because of what appeared to be a mis-shaped curve of the rim. I took it to be that the bowl had been trimmed when it was too wet and had released and curved inward. On closer examination, I realized it was not a casting error. The bowl was cast from a mold with a higher curve to the rim. 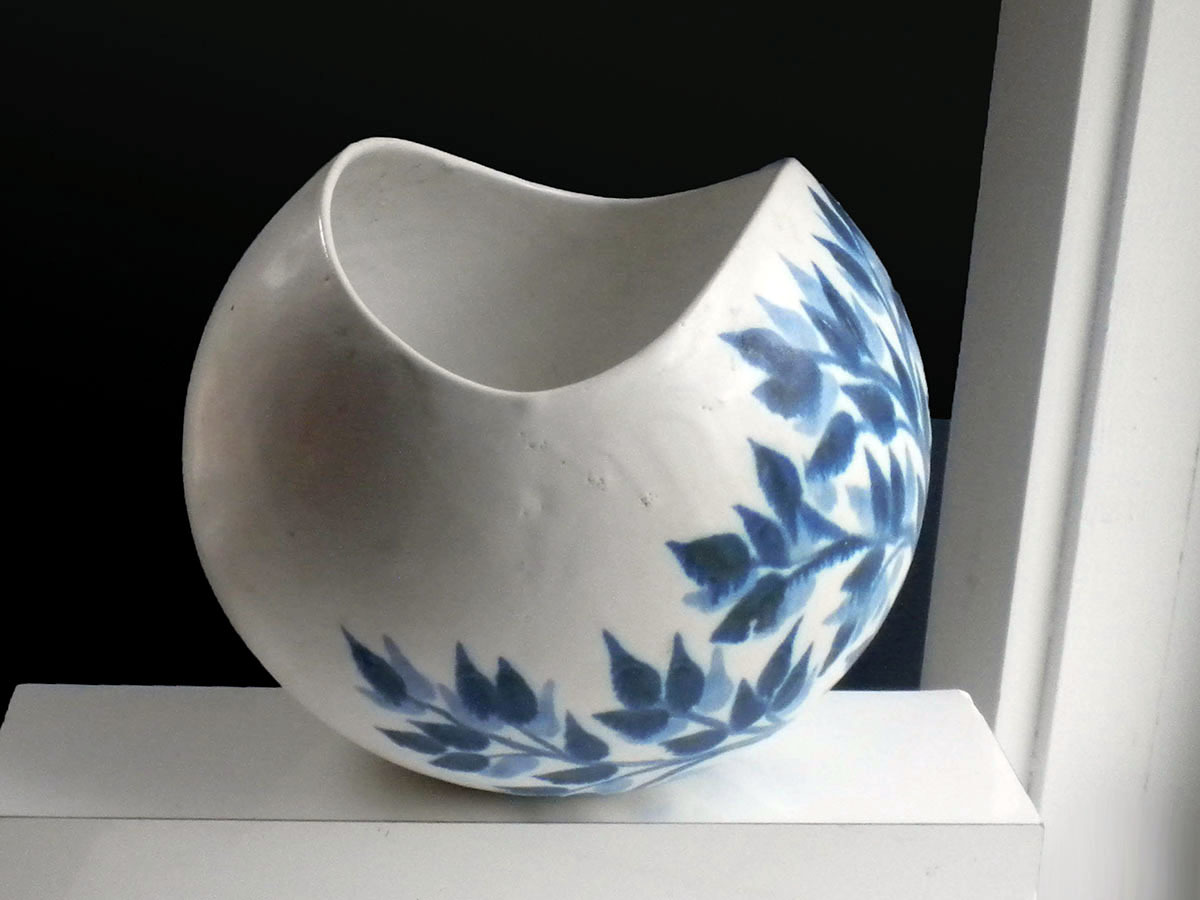 Observed side by side with another bowl it is obvious that there is no warping in the globe of the bowl. The blue flower bowl is the one on the right in the picture. Both bowls have perfectly formed globes. It is only the curve of the lip line which is different. This revelation identifies the blue leafed tree bowl as an original prototype which was cast and found unsatisfactory and so the form design was reworked, reshaping the curve of the cut-out lip. 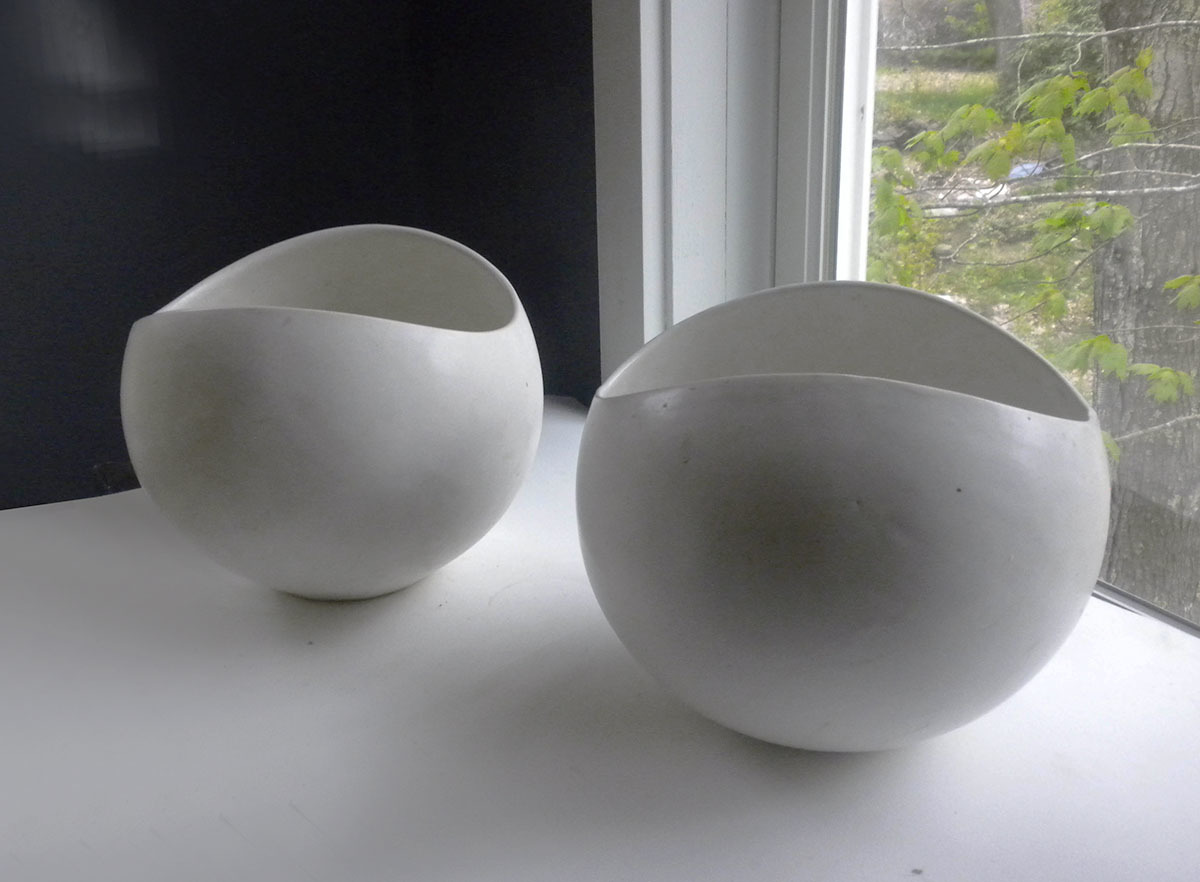 Working Prototype to the Right, Bowl with Adjusted Lip Curve to the Left

The Lip Curve of the Finished Form.

This makes the bowl a very rare one of a kind casting of a prototype in the works. The bowl has some additional defects in an indented mold line, which is visible in the photo below and some small irregularities in the glaze application. While the curve of the lip is not right for the form of the bowl, this is only evident when looking down on it, Viewed from the front at a common placement, the curve of the lip is attractive and adds more room for the decorative tree, painted by Brenda, to grow. In the photo at the top of the page the form of the blue leaf bowl is not noticeably different from the other two and the tree is vibrant and vivacious. 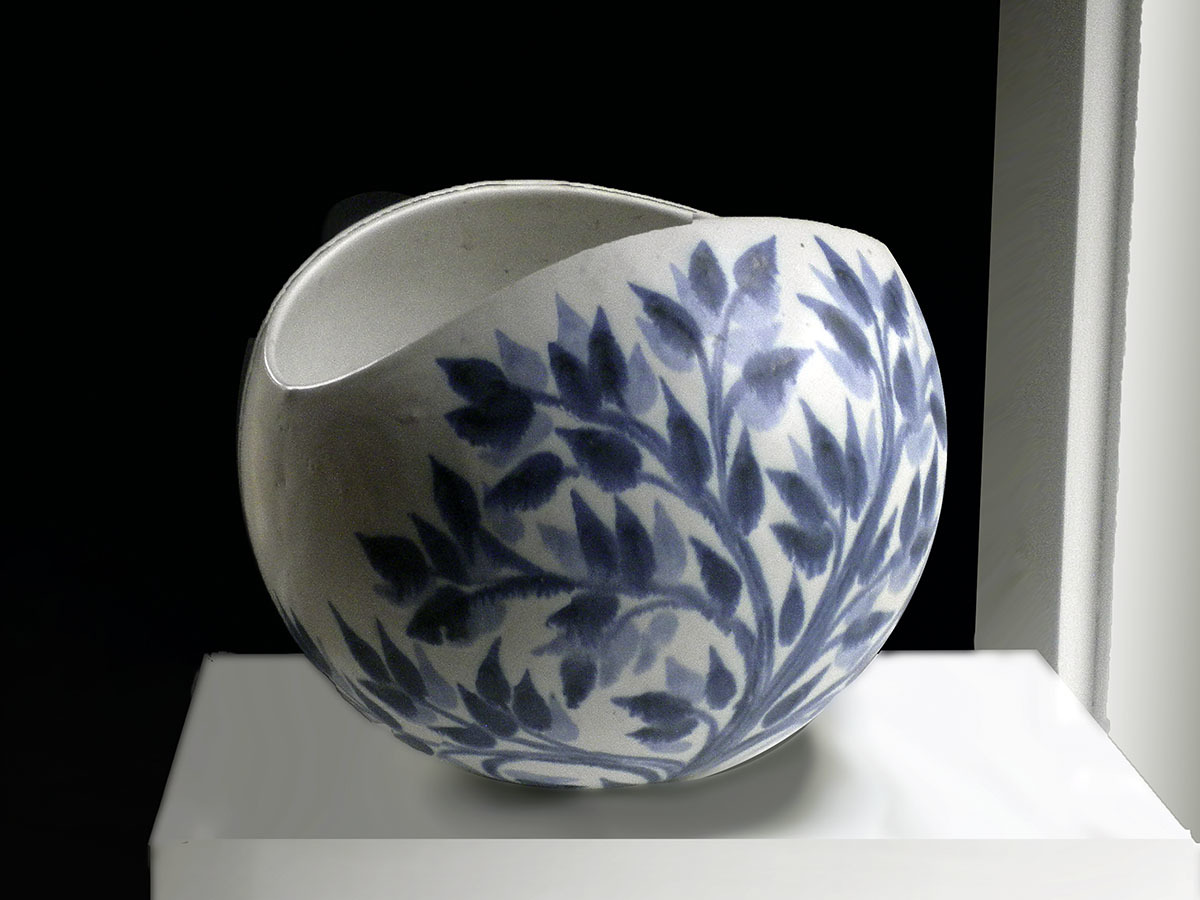 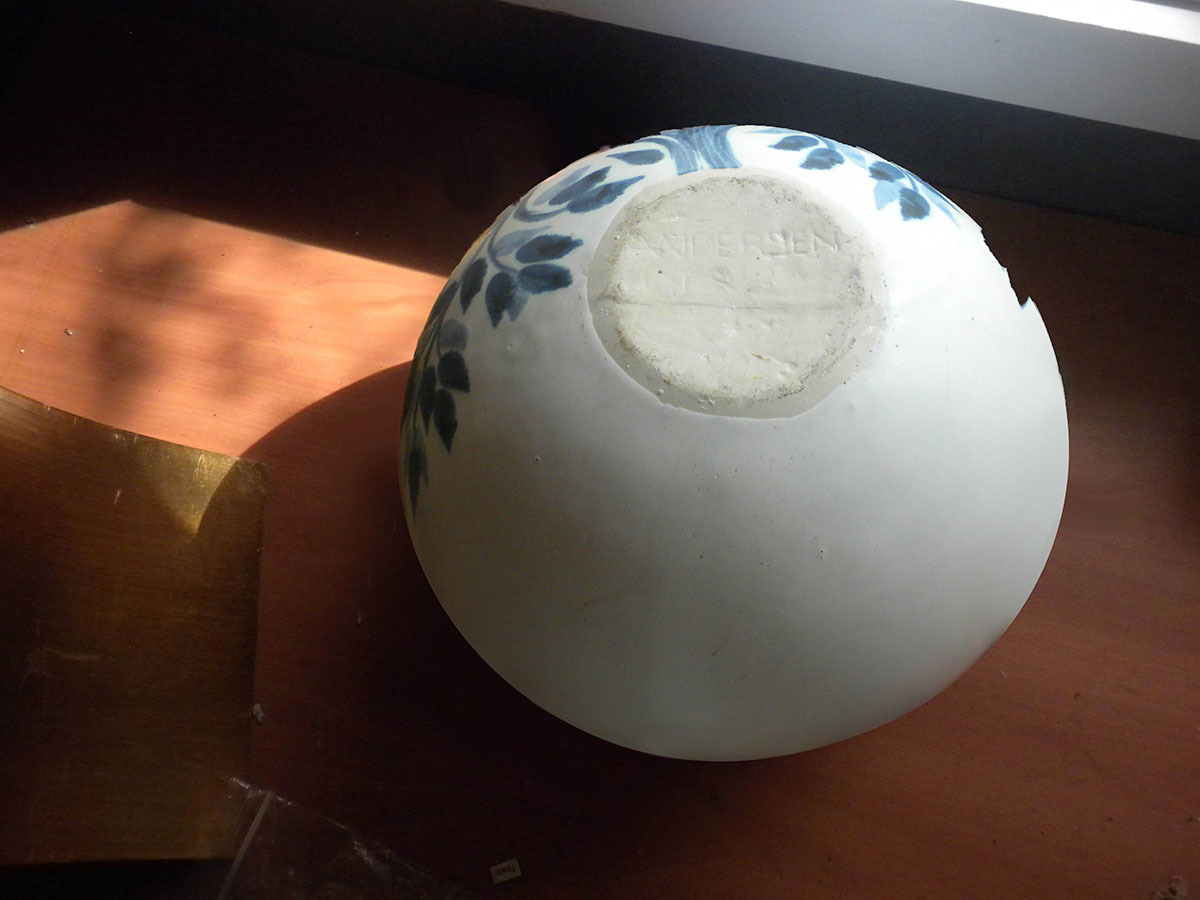 The Working prototype is signed with capitalized letters spelling ANDERSEN, written in sgrafitto

SEE More about this bowl:on MEDIUM. What Difference A Curve Makes